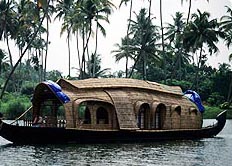 Kerala, the land of exotic beauty and charm, believed to be the land of the Gods, has mesmerized many a traveler from near and far, since time immemorial. Laced with emerald green coconut trees, this vastly coastal State is indeed a treat to the eye. Add to it, the splash of backwaters, the mist-clad mountains, and the rustic life in picture book towns, the glorious art forms, and the ancient science of healing.....and...you are only beginning to unravel this mystical land of Kerala, ever full of surprises!

Kerala has some of the pristine hill stations in India, with the entire Western Ghats dotted with evergreens, rolling grasslands, sholas and stretches of rejuvenating fragrance of tea and coffee plantations. The wilder side of Kerala has in store some of the best wildlife sanctuaries and national parks in the country with a variety of plant and animal life unique to Kerala.

Glistening brooks and cascades that interstice the hills finally roll down to the coastal plains of Kerala where they laze through verdant stretches of paddy fields, coconut trees and feeds some of the splendorous expanse of backwaters and lakes.

Let yourselves cast away amidst the serene environs of a backwater islet, treat your body and soul to 'Ayurveda' - the sacred knowledge of life. Take a backwater cruise on a country boat with palm fringed land on either side and experience the many faces of the backwater life of Kerala.

Crave for Sun & Sand! Come and embrace the golden sands of its immaculate beaches, pep up your spirits under the tropical sun and feel the pulse of its coastal life. You can also enhance your gastronomy skills or give a break to your taste buds and savor some of the ethnic dishes of the land.

The cultural mosaic of Kerala is studded with landmark monuments, palaces, forts, memorials, and places of worship portraying the socio-cultural and historical evolution of the land with indelible marks left by travelers from far-flung lands. Be part of its many festivals and celebrations to understand its significance, emotions and traditional practices of Kerala.

The beautiful state of Kerala is positioned on the tropical Malabar Coast in southwestern India. The state shares its boundary with Tamil Nadu and Karnataka on its east and northeast. The Lakshadweep and the Maldives islands lie to its west and south respectively.

Kerala experiences a tropical climate. The state, however, remains pleasant for most part of the year. Summer time begins in the month of February and continues till May. The maximum temperature records 33 degrees centigrade. Monsoon begins in June and continues till the month of September. The month of October marks the beginning of winter season. During this period, minimum temperature records 20 degrees centigrade. September to February is the ideal time to pay a visit to the state. 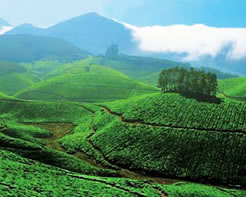 Kochi or Cochin houses some of the oldest structures of the state. Attractions include the Dutch Palace, the Jewish Synagogue, St. Francis Church, Santa Cruz Basilica Church, the Bolghatty Island and the Willington Island.

Rightly referred to as the Venice of the East, Alappuzah has got a huge network of lakes, lagoons, fresh water rivers and canals. It is popular for houseboat cruises and its Coir industry.

Tucked between the waters of the Arabian Sea and the Wayanad Hills, Kozhikode is an idyllic tourist destination. There are attractions like the Pazhassiraja Museum, the Dolphins Point, the Science Planetarium, the Marine Life Aquarium and the Art Gallery. 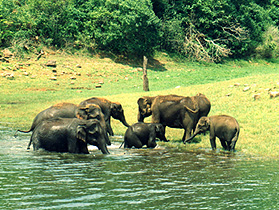 Thekkady attracts hordes of tourists and travelers to its world renowned Periyar Wildlife Sanctuary. The sanctuary is popular for Indian elephants that can be seen frolicking by the Periyar Lake. Rolling hills and spice scented plantations make it an ideal tourist destination.

The Backwaters in Kerala are the devices more the enchanters of Kerala. Backwaters are ahead and behind made up by the ponding of sea to the beach by the movement of the waves. They are usually formed in the form of lagoons, of lakes and estuaries. The Backwaters in Kerala is a network of exquisite channels, lakes, lagoons and deltas of approximately 44 rivers emptying in the Arab sea. The principal mode of transport on these backwaters is by houseboats bus more 900km of this world of water is navigable.

A voyage north of Alappuzha takes you to the rich green, sleepy little village of Kumarakom on the Vembanad Lake.

An enchanting picnic spot and a fast developing backwater tourism destination, Kumarakom provides boating, fishing and sight-seeing experiences that are truly exhilarating. An exclusive attraction of this much sought after backwater resort is the Kumarakom Bird Sanctuary.

The Kumarakom Bird Sanctuary is an ornithologist's paradise and a favourite haunt of migratory birds like the Siberian stork, egret, darter, heron and teal. A cruise along the Vembanad Lake is the best way to view the bird life.

Alappuzha is one of the major centers for backwater tour in Kerala. The intricate network of canals through this town has earned it the sobriquet "The Venice of the East". Small but long country boats are the taxies of the water. The coir workers present an interesting sight as they soak coconut fiber in pools, beat them and wind the strands on long spindles stretched between an endless lines of coconut trees.

In north Kerala, the cool backwaters of Kozhikode lay waiting to be explored. This old commercial town attracts travelers for its history, wonderful backwaters and leisure sports.

More popular as the Queen of Arabian Sea, kochi is a cluster of islands on the vast expanse of the Vembanad Lake. Some of these picturesque islands are Bolgatty, Vypeen, Gundu, and VallarpadamIt has a fine natural harbor around which the city has grown. 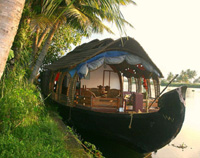 Kottayam is a beautiful Kerala backwater destination Kottayam - "the land of lakes, latex and letters", that's what it is famously called. Interspersed with a network of canals and lakes, Kottayam is also known for its toddy tappers. This is one place where you will find that even one person is not illiterate. The beautiful Vembanand Lake and its associated backwaters border Kottayam district on the West. Kottayam is located in an area of great natural beauty and you're sure to be enchanted by the scenery around Kottayam on Kerala tours with Kerala Backwater.

The colorful mosaic of Kerala fairs and festivals is as diverse as the land, is an expression of the spirit of celebration, that is an essential part of the State. Observed with enthusiasm and gaiety, festivals are like gems, ornamenting the crown of Kerala tradition and culture. Round the year the fests keep Kerala life vibrant and interludes in the mundane affairs of life.

Every season turns up new festivals, each a true celebration of the bounties of nature. The festivals exhibits an eternal harmony of spirit. Packed with fun and excitement, festivals are occasions to clean and decorate houses, to get together with friends and relatives and to exchange gifts. 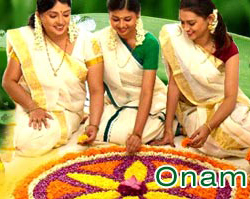 The 10 day Onam festival is kerala's most important festival, honouring King Mahabali, a mythological king of ancient Kerala, whose period was reckoned as the golden age in the history of the state. He was the embodiment of virtues, goodness, so was his regime which was marked by equality and harmony among people.

The most spectacular spectacle in the state. This festival was introduced by Sakthan Thampuran, the Maharaja of erstwhile Kochi state. Celebrated in Medom (April-May) the festival parades the fulgent faces of Kerala culture. With every passing year Tthrissur Pooram, the temple festival, attracts large masses of devotees and spectators.

The famous snake boat carnival on the Pampa, held annually at Aranmula on the day of Uthrittathi asterism, in connection with the Onam festival is to commemorate the crossing of the river by Lord Krishna on that day. The deity is supposed to be in all the boats that take part in the carnival and all of them are expected to arrive a t their destination simultaneously.

Easter is the oldest Christian festival, as old as Christianity itself. The central tenet of Christianity is not the birth of Jesus, but his resurrection. Easter is derived from this paschal mystery and from the events of Good Friday.

The festival falls on the asterism Thiruvathira in the Malayalam month of Dhanu (December-January). On thiruvathira morning, devotees throng Shiva temples for an early worship which is reckoned as highly auspicious. 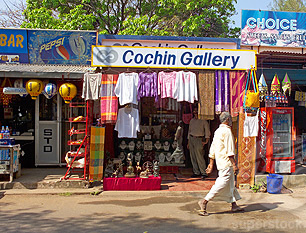 The state of Kerala has three airports located at Thiruvananthapuram, Kozhikode and Cochin. These airports operate numerous domestic and international flights connecting to different parts of the country and the world. Kerala boasts of 200 railway stations that link the state to all the major cities of the country. The state has a fabulous road-network as well.

The state is home to a number of skilled and gifted craftsmen and artisans. There is a lot to take back home including exquisite wood carvings, souvenirs, brass ware, bell metal products, coir products, can bamboo works, sandalwood, conch shells, paintings etc.